A typical day in Goa kicks off around 8am. Sometimes it’s a bit earlier. I do manage to get to the gym every second day and when an Aussie friend was here, we would swim between the lifeguard stations which is probably around 800m. But otherwise it’s a routine of getting up to a strong Nescafe. I’ve managed to adapt in some ways to awful instant coffee. Had I been a bit more on the ball I could have tracked down a plunger but on some days, I venture to the German Bakery or a local franchise called Coffee Day Café for a half-way decent brew.
Our apartment is a rather spacious two bedroom one with a study that serves as the open suitcase room. It has two bathrooms with one including a bath that has been claimed by Jackie. This works well as the shower is rather pathetic, with a flexible tube and an old fashioned style telephone type shower head. Very English in every way. While my bathroom is somewhat more utilitarian, it has a decent shower.
Our kitchen is spacious and well equipped expect it doesn’t have a proper oven. Eating out is very cheap here so apart from fried eggs for breakfast most days, simple pasta dishes and experimental Indian cookery learned through cooking classes.
We have ample ceiling fans and air conditioning however power cuts are frequent. Sometimes many times a day. It generally comes back after a few minutes. There are backups in most modern places. When ours cuts out we lose the air con but not the fans, We lose the fridge and microwave but not the tv. It is generally no more than a mild annoyance. More annoying is the internet. There are virtually no landline connections so a mobile modem is the only way. The internet is usually ok in the morning but tends to get worse in the evening. I hedge our bets a bit by having two mobile modems on different networks and some data allowance on my mobile (on another network again). But sometimes all three are rubbish and you just have to suck it up. I’ll complain less about the internet in Australia when I get back.

We hire a scooter as main transport as taxis are very expensive by Indian standards. Buses are reasonably frequent and cheap but the convenience of our own wheels is too tempting. The rental for it is about $A6 (£3 a day). The traffic is mad of course and takes some getting used to but as in all these countries with virtually no discernible road rules there is a kind of etiquette. I’m sure it would bamboozle most in the West but it is helpful that traffic is relatively slow. There are the added hazards like cows, dogs, poorly marked speed humps and people who aren’t too fussy which side of the road they drive on. Nuts, but you kind of get used to it.

So, to resume the daily routine. We usually head down to the beach at the first opportunity. While Candolim is a fairly developed part of Goa, the beach is very large and so pretty uncrowded. With a mostly European and Indian tourist population, they barely venture into the sea. Many are English and Russian so sit or lie on sunbeds doing anything but actually engaging with the sea itself. They look at me strangely when I emerge from waves that they consider far too rough to even think of going in. Of course, by Australian standards it’s all pretty mild. I do impress some of them with my body surfing.

Something they wouldn’t even think of doing. Indians are even stranger in this situation. They have quite a different way of swimming. “Men in drawers walk the beach or dive into a resort pool while their fully clothed women frolic in its shallows..” says one Indian website describing the new age of Indian tourism. The article is an apt description of local tourism in modern India: https://www.dnaindia.com/analysis/column-when-the-twain-shall-meet-2691391?fbclid=IwAR1h7mWRsBYLdKGhnQAyNq9yKxyVHnOI1g15DnkPzRnosbEaHWoHkvhGoMc. Indian tourists are on the rise in Goa as Europeans increasingly retreat in the face of over development, higher prices and annoying, expensive visa regulations. Indian tourists are not particularly popular with locals. They tend not to spend money in restaurants and bars and often are to be found roaming the streets in packs (males especially) inebriated on cheap and strong beer. Booze is cheap in Goa – much more so than other states in India, some of which are completely dry. With large groups of Indians comes the inevitable: noise. They are not a quiet people. This article sums up how tourism is developing here: http://www.openthemagazine.com/article/society/the-ugly-indian-tourist
This is not a racist rant, Indians like all others on the planet, some are lovely others certainly not. The people are amazingly diverse, ranging in colour from the white to the deepest black. This is a country that swarms with crowds, noise, colour and chaos. It may not be everyone’s cup of tea but for those of us who embrace it, it is life affirming. To have lived here month on month and lived it every day, it is wonderful.
But I digress again. The beach is lovely and the swim is like having a bath as the water hovers close to 29°C. Some days the surf is great for a frolic, others it is rather too calm. On those days the English will venture in for a paddle. The walk to the beach takes around ten minutes. It is a pleasant one down a dirt track that wends through the palm trees and old Portuguese villas. Strange and exotic bird noises fill the air. On many days this short walk fills me with the invigorating essence of what travel is for me. I suspect it would be like all of Goa was twenty or so years ago. But on the way back when you hit the main road that vision tends to vanish.

Our daily walk to the beach has brought us into contact with our three main furry friends. Ashley, Stumpy and Tyrian. Ashley loves to lie in the ash residue of the frequent rubbish fires that are lit in our street just over the wall.

Stumpy is fairly obvious. We meet her near the beginning of the track to the beach. Sometime in her past there was an unfortunate accident with her tail. Finally as we progress down the track is Tyrian. A strange looking dog. The picture does not convey his diminutive stature. When you see him you would think he should be bigger. He has the rumpled and loose skin that should be on a larger beast. He is a pleasant creature although a bit doddery. We greet each other everyday when we pass and it is unusual not to find them in 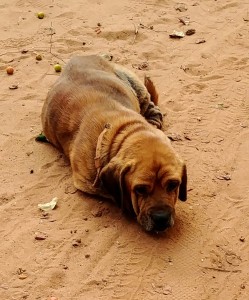 their customary places.
The days never drag. It always seems to be a surprise when we mockingly ask: “Where has the day gone?” Of course, typical days are not always typical. Some days we have errands to fill. Sometimes there are things to find like clothes, medicines, bags etc. We have out rides into the hinterland or to other beaches north and south. Sometimes we venture into the state capital Panjim and walk through the old Portuguese quarter. Others we spend time with friends we have made here, usually at some musical event. Life is hardly hectic but not really empty either. This is some sort of practice run for retirement It would be hard to understand for many friends back in the world of work. A rigid adherence to the protestant work ethic would probably fill me with guilt most days. But it does so less and less. I am aware however time can be wasted so it is best to try and fill it with creative things if possible. Work does loom on the horizon as we haven’t retired and realistically can’t retire for some time. For now, typical days are very pleasant days.